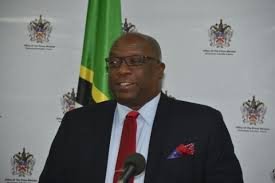 Ambassador Schnider paid a courtesy call on the Prime Minister at his office (on government headquarters), on Wednesday, July 13th.

During the meeting, the officials discussed a wide range of issues, including the parameters for establishing a Permanent Mission to the United Nations.

Dr. Harris also hoped that Switzerland, advocates in the international fora for the maintenance of relations with the correspondent banks in the region, specifically those in St. Kitts and Nevis.

He also impressed upon the visiting ambassador, the intention to move away from the use of fossil fuel to alternative energy sources: including wind and geothermal energy, and called upon the Government of Switzerland to aid in this respect.

Ambassador Schnider is also expected to travel to Nevis during his current visit, where he will meet with Premier of Nevis, the Hon. Vance Amory, as well as Deputy Premier and Minister of Foreign Affairs, the Hon. Mark Brantley.

Nationals of St. Kitts and Nevis have been able to travel to Switzerland for up to a period of 90 days, without the need for a visa as of 2011.

14 of SKN’s 15 confirmed cases recovered, representing 93 % of the cases