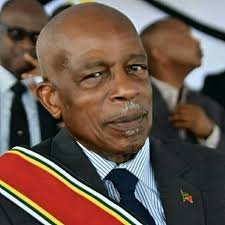 Two (2) separate launch ceremonies were held. On Thursday evening Dec. 19th, the ceremony was held at the Methodist Church Hall, (Old Boys School), in St. Kitts, at 7pm and here on Nevis, it was held on Friday evening Dec. 20th at the St. Paul’s Anglican Church Hall, in Charlestown, at 6pm.

The book chronicles Sir Simmonds life from his early days as a boy living at Rosemary Lane in Basseterre, through his primary and grammar school days, before going on to become a medical doctor and then the last Premier and first Prime Minister of St. Kitts & Nevis.

Here is Sir Simmonds during the ceremony in St. Kitts.

Meanwhile, he also mentioned what measures were taken to complete the book.

Copies of the book will also be sold at local bookstores in Charlestown and Basseterre. At present, the book can be purchased at amazon.com.