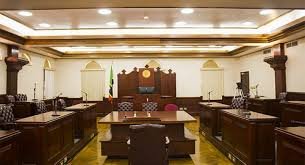 The National Assembly here in the Federation, was dissolved on Tuesday May 12th.

Dissolution is the official term for the end of a Parliament.

Prime Minister, Dr. the Hon. Timothy Harris made the announcement in an address to the nation on the  evening of Wednesday May 13th, 2020.

But why has this happened?

It is because of the fact that the Government is allowed a five-year term after the first sitting of parliament (May 14th 2015) which was after the last General Elections (February 16th 2015) here in SKN, according to Chapter 4, Part 3 of the Constitution of St. Kitts and Nevis.

Regarding the Holding of election, Chapter 4, Part 3, sub-section 48 of the constitution states “a general election of members of the Assembly shall be held at such time within ninety days after any dissolution of the Legislature as the Governor-General may appoint.”

Tags: 2020, Dr. the Hon. Timothy Harris, Federal Elections to be held in 3 months, National Assembly dissolved on Tuesday May 12th